Superbook teaches children timeless moral truths and life lessons through the captivating, Bible-based adventures of two time-traveling children and their robot friend.  The familiar and the futuristic interact with ancient people, places and events to create a sense of wonder, anticipation, empowerment, and personal breakthrough as the children witness God’s interaction with man.  Superbook is always an exciting journey, full of discovery – with a transformational outcome.
Superbook is a story that with the help of the Quantum Family, their good friend Joy and their trusty Robot Gizmo, will take you on an adventure throughout the bible. Click on the tabs below to meet the characters. Professor Quantum is a brilliant scientist and inventor. He, almost always is seen wearing a lab coat. Father of Chris and inventor of the robot, Gizmo, Professor Quantum can sometimes be a little too focused on his latest experiment or invention. The professor is a kind, warm-hearted dad who wants the best for his son. Phoebe Quantum is a busy homemaker and a great counterbalance to her scientific-minded husband, Professor Quantum. She reads voraciously and enjoys a good comedy film. One of her greatest strengths is being a guide, counsellor and good mother to her son, Chris. Chris Quantum, is an awesome skateboarder, video gamer, and lead guitarist in a garage band, with his Valleyview Middle School buddies. Chris is the son of Professor Crispin Quantum. Chris uncovers the secrets of Superbook and discovers through a mysterious portal to the past. Joy Pepper is the next-door neighbour and classmate of Chris Quantum. She is outgoing, smart, athletic and usually a bit more adventurous than Chris. Gizmo is a robot created by Chris’ dad, Professor Quantum, to protect the kids—but they end up protecting him. He has the latest upgrades which makes him incredibly useful on the adventures through time.

Through the children’s Superbook website and the app you have access to The Superbook Online Bible. This is a great resource, as not only can you look up your favourite bible references, it links you straight to the Superbook episode that links to those verses. This will allow you to not only read God’s word, but see it animated as well. On the right hand side of the scripture there are also links to games, quizzes and questions to help you to think about that piece of text further.
Have a go at Gizmo’s 30 day Devotional challenge! 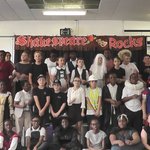 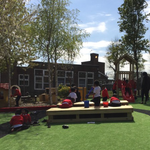